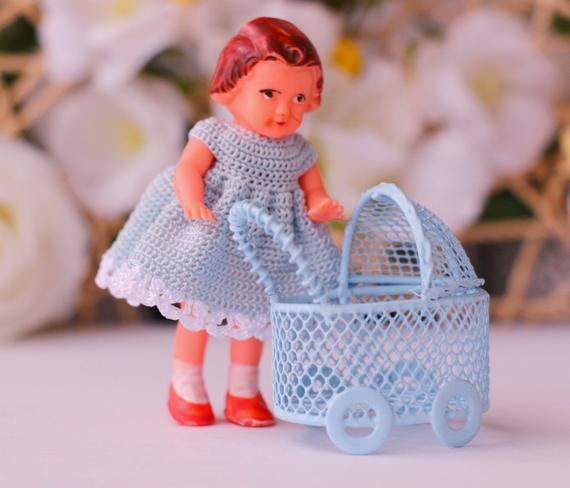 I did a little research about ARI German plastic vintage dolls in Instagram and I can say with confidence that vinyl dolls ARI occupy an honorable first place there, but the most interesting thing that surprised me is the mad popularity of dolls in Korea and Japan.

My story will be somewhat long, but the little ARI dolls deserve such close attention.

1. Birth of the company.

Production was a family affair. The company grew out of a handicraft industry founded by August Riedeler Joanna’s wife.
ARI, short for August Riedeler GmbH & Co. KG., according to the official version, was founded in 1864, but at first it had nothing to do with dolls.

In those early years, all the dolls were made of porcelain, because the commercial advisor August Riedeler (son of the founder) worked in 1864 in Constantinople with the local ruler as a porcelain manufacturer. But when the riots broke out there, he moved to Grobreitbach in 1872 to produce porcelain in his own country (this year is listed in the old-style stamp as the year the company was founded).

His wife owned a small toy shop at the time, where they sold nappies in baptismal dresses, wooden horses from their own workshop and other toys.

Also in 1872, his son, Carl Riedeler, joined the company. The factory itself produced small dolls and porcelain doll heads, as well as children’s sets.

The part of the company moved to Konigsee in 1930. Production was rapidly gaining momentum – during this period, the Woolworth chain of department stores alone supplied up to a million ARI sponge cake dolls annually. In addition to its own puppets, the company also traded Schildkrot, as it owned the rights to sell them in Thuringia for over 40 years, until 1945. As a rule, ARI used to dress and decorate small turtle dolls in beautiful sets.

In 1936, the company was taken over by Carl Riedeler, the son of the company’s founder.

Now collectors know how to mark ARI pupae. It is a triangle with the letters ARI inside, but for ARI dolls of the early period, it was not a triangle we are used to, but a heart (though with a triangle inside). There was another mark engraved on the head with a chest plate and a simple mark like “AR 6”. And if we look closely at the stamps on the ceramic nails, the triangle will see only two letters “AR”.

After the end of the Second World War, the factory was in the eastern zone and had coal problems for the production stoves, so that further production of porcelain dolls was impossible – and Mr. Steinmann (son-in-law of August Riedeler) was tasked with creating unbreakable dolls. As a result of numerous experiments, the first plastic (vinyl) doll was born. PVC waste was used for this purpose. Production began immediately. The production of rubber dolls was probably started at or around the same time.

In 1972, the company employed approximately 1200 people, producing 55,000 vinyl dolls daily, which were exported to all corners of the world. In the same year, 1972, the company was nationalized. Probably during this period, it was called Konigseer Puppen.
Since 1981, Konigsee has been part of VEB Kombinat Spielwaren Sonneberg, along with 19 others, as VEB Puppenfabrik Konigsee.

These were inexpensive, charming little dolls and nappies. Their faces, lips and shoes were often hand-painted and their limbs were mobile. The outfits were naive (often of poor quality), and among the popular figures were Bavarian costumes by ARI, Red Riding Hood and merry sailors. They also had accessories such as furniture, toys and tea sets.

The Ari pupa can be bought as a family. In the 1950s, there was an announcement in which Ari shows a typical ARI family. Parents, two children, a family, a nanny, and a housekeeper! The addition of a housekeeper is surprising, as they were sold in Socialist East Germany.

Ari’s dolls were sold all over the world. By 1964, the company produced 30,000/40,000 puppets per day; 90 per cent of them were exported to the United States, Canada, South America, Australia, South Africa, Iraq and the United Arab Republic. ARI was one of the top ten largest companies in East Germany.

5. The post-war history of the company.

With the help of ARI’s own equipment and materials, which was stolen, Dittmann started manufacturing ‘Edi’ dolls at the Genienau villa in Melem near Bonn. Dittman owned the entire factory – but then lost it to the bankruptcy of his other two companies. Herr Dittman cheated his director, as he in turn cheated Riddler and in the autumn of 1960 the factory was taken off the books, and Dittman’s private assets were forcibly sold from the auction.

The little dolls made their new creators a fortune.

Horst Steinmann, Riedeler’s grandson, remained director of the ARI dolls Factory in Königsee, Thuringia, even after 1972. He returned his company after the coup, but the financial difficulties were very high. By 1994, he managed to revive production despite the abolition of subsidies and the lack of bank loans. He visited numerous exhibitions and fairs in the USA, Korea, and Taiwan. So Puppet Factory A. Riedeler GmbH & Co. KG Konigsee returned to the world markets. But not everything was returned, plastic dolls from Southeast Asia were leading the markets.

The company tried to revive its own history by creating “reproductions” of porcelain dolls, but they were too few and too late …

Two years later, due to the drop in sales, the company had to declare bankruptcy. In May 1999, the factory in Koenigsee was destroyed, including a furnace filled with plaster forms to order.

In January 1999, Uwe Stenmann’s son tried to revive the company and produced garden gnomes, but this did not help. The last batch of 400 small dolls and puppets were the last ARI porcelain dolls ever made by Horst Uwe’s son, ARI-Dolls-Uwe Steinmann.

The popularity of ARI dolls collecting – for dollhouses and for photographing on Instagram – has led to a sharp increase in their prices. They can be found on eBay and with private collectors.
As for all the time of the company’s work, dolls were made in huge quantities, it is still possible to find Ari dolls.
And even if you don’t find the cherished triangle on the back of the doll, you will be able to understand that the ARI doll is in front of you. The faces of dolls are very easy to determine.

***How my doll***
This doll model hasn’t changed in years. The approximate age of the dolls can only be determined by the clothes and materials used.

New dresses for ARI dolls are already at the new owners’ house.

The production was in operation until the beginning of this century and is currently closed. There are still a lot of ARI dolls in private collections and in museums in different countries. Many peoples remember and love large and small, plastic, ceramic, porcelain, and rubber dolls from Konigsee.

You can see and buy miniature dresses for your ARI dolls in my shop. Please visit it  For salehttps://www.creativhook.com/product/miniature-crochet-dress-for-3-inch-ari-german-vintage-doll/

4 thoughts on “Ari dolls, history and a second youth.”