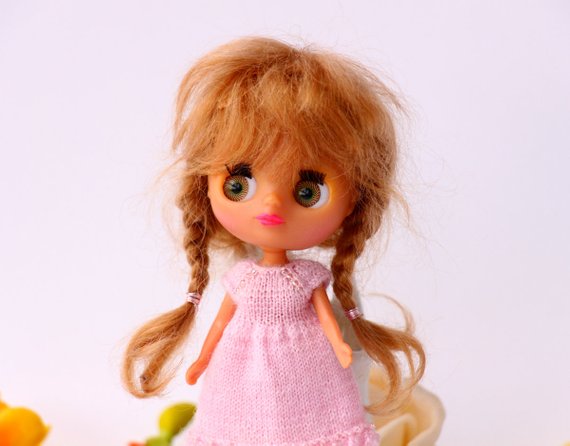 I was always afraid of Blyth dolls, and I didn’t plan on buying them.

But the little doll I took the risk to buy. It was important for me to understand if I could make clothes for her. And, finally, she is at my home. I will make a reservation at once, I bought not the original. But now I think, that need to buy and “the right” doll. Blythe (in English transcription of Blythe) is a collectible doll with a disproportionately large head in relation to the body, inside of which is hidden a mechanism that allows you to change the color of the eyes and the direction of gaze.

A little bit of history and facts about Blythe.

Blythe doll was born in 1971 in Marvin Glass Studio in Chicago, Illinois, and was originally intended for children.  The first Blyth was produced by the American company Kenner (Kenner), now this doll is better known as Kenner Blythe or vintage Blythe. In 1972, production ceased due to lack of demand. In the same 1972, the Blythe doll was produced in parallel, and in the Japanese market by the company Tomy (Tomy), but also had no success, and the production of it was discontinued. Now-dolls release 1972 from Kenner and Tom are very rare, valued by collectors, and are expensive.

Production of dolls resumed only in June 2001 already in Japan by Takara (Takara), which received a production license from Hasbro (Hasbro) new version of dolls Blythe – Neo Blythe (Neo Blythe). 23rd June 2001 is the day of the revival of Blythe, in honor of this event every year in June/July issued a limited-edition commemorative doll Blythe, which has a more complex elaboration of the image.

Blythe doll was produced at different times by different companies:

This information will be useful to those who want to have such a doll.

At the moment, under the brand name Takara dolls are produced on three scales, but I will not go far into them. My baby doll is the smallest. Doll Petit Blythe (Petit Blythe) height 11.5 centimeters released.

The face of the doll is covered with a glossy coating, no eyebrows. The doll’s body is frosted. The hair is stitched into a soft scalp that is glued to the head.

I not immediately have become to change this image and a long time my baby was here is such a. The majority of Blythe very simple makeup – eyeshadow, blush, and lipstick on her lips.

The mobility of Blythe’s body is limited by the rotation of the head, waist, arms and legs rotate in up-and-down directions, but do not divorce the sides. Hand dolls are not bent legs Blaise bent at the knees a few clicks.

As my fascination with dolls already has a considerable age), I got some wigs. So I decided to change the image of the doll and tried on her new wig. I think he was better suited to the pale skin of this girl.

I have a lot of ideas, but unfortunately, the day has only 24 hours))) And especially I have a lot of beautiful and colorful yarn. So that????? on any my idea) Thank you large all for attention!