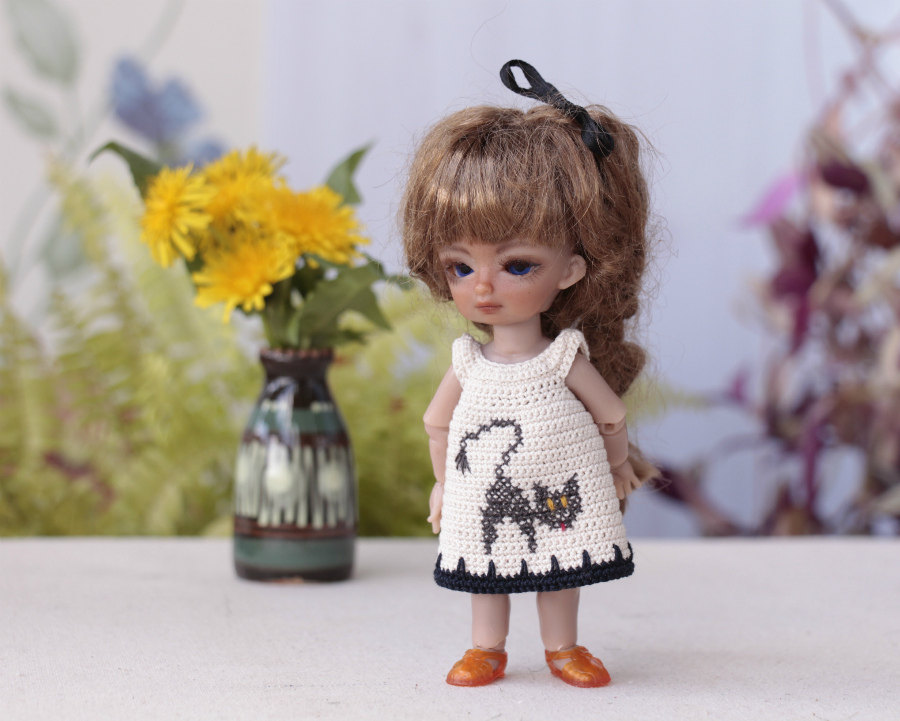 Today  I’ll show you  doll  by Hujoo dolls family.
This doll appeared in my dollhouse in 2016. That year was rich in purchases and information.
This doll was a source of irrepressible fantasy for me, for which I tied up a large number of models, which later turned into the main models of doll dresses for other dolls.
With this doll I learned to change wigs and eyes for the first time.
Before that, I had no idea how to do it. It was a little scary and a lot of excitement)

Over time, all the fears and excitement faded away, and I liked each new image of Ellie more than ever before, but it was all later. While I was waiting for the doll to arrive, I was reading everything about the company and my doll.

Hujoo was invented in Korea in 2005 by the designer and head of Hujoo – Hyun Song Ian. The features of the doll’s face echoed the shape of a cat with pointed eyes and puffy lips. Yang himself, as he wrote about himself, embodied the traits of a rebellious teenager with a bad character inherent in this age. That’s probably why his dolls are special.

Having read a lot of information on different doll forums, I was horrified to learn that these dolls are not very popular in the families of collectors of the BR. As they write in the press: “When the Hujoo ABS line of dolls was first released, the denial in the BJD community led to a much bigger drop in sales than expected by Hujoo.

It’s hard for me to understand this attitude towards this cute creature. But the world of dolls is sometimes very cruel. But let’s not talk about sad things and get back to Ellie

First Hujoo doll debuted in Seoul in 2005. Prototype Hujoo — Mujoo was made of polyurethane resin. This material was very good for clear contours, small details, but too heavy for the big head dolls. Mujoo was more available and less mini-verse original Hujoo. The laboratory, in search of a better material, discovered ABS and upgraded it to the new Hujoo in 2007, which was presented the same year at the world puppet festival in Korea.

My doll came in a line of dolls 11-12 cm in 2011. And this line was called Hujoo baby. In this line there were three option little dollies Ted, Is, and Suve.
Mold my Ellis is Ted. Though the name mold boyish, she is very cute and attractive doll. She has 14 points of articulation and assembled like a traditional BJD doll.

Hujoo is constantly expanding its product line. Currently, Hujoo produces 4 different doll ranges with accessories and components. Full information can be found on the official website of the company. In the meantime, let’s see a fashion show of dresses for Ellie. 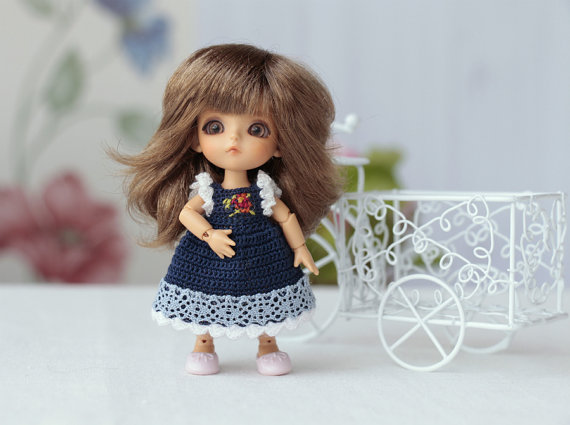 I create dresses for dolls. And I really wanted to use miniature embroidery to decorate small dresses. The doll is my most obedient models and dressing them is a lot of fun. Any of them can be very beautiful in the fancy dress.
I usually crochet a simple pattern. This method of knitting in combination with a very fine hook gives a wonderful canvas.

It captures the effect of the canvas for embroidery and allows you to create miniature flowers.

Thread for embroidery you can use absolutely any, depending on the idea.

In the last post, I wrote about cross-stitch.  And here is what I chose to decorate the outfits of the residents of my Dolls countries. Such a field for inspiration and creativity. When a knitted cloth blooms little flowers. Winter is eternal and spring is breathing down her neck, in spite of frosts and blizzards. Therefore, in order to bring spring, I’ve made a few dresses with embroidery.

So… all the attention is on the screen. The show involved Kelly doll from Mattel, Jia and Haru from LatiDoll Lati and doll of Hujjo.

If you collect dolls and you will want to dress them in beautiful dresses, I’m happy to see you in my cozy little shop. 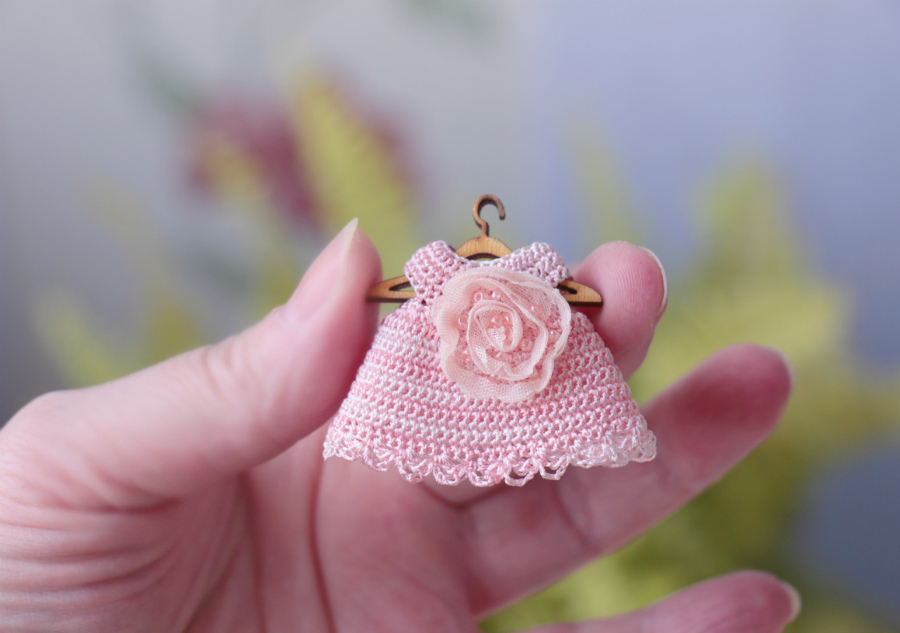 When You already know me and know about my dollhouse hobby, I want to acquaint You with the inhabitants of my small dolls country and their stories.
Let’s start with the youngest residents, only 2 inches length.

Someone who chooses?  We choose puppet or……

In this baby I fell in love at first sight, seeing him so small in a big lot on eBay. Lot didn’t break, and the whole merry company of 5 dolls together went to me.
When they arrived, I did not regret his discovery and purchase. All 5 dolls have been charming and baskets that were in the package also came in handy.
The kid was amazing and magical. This miracle growth of only 5 cm ( 2inches)

The country of origin, as was evident from the inscription on back Germany. Made of thin plastic. He called celluloid. Very fragile and weightless. This material, along with porcelain was very popular in the years 60-70. Arms and legs are connected by rubber bands inside a small calf. Face charming and well-drawn.

The first time I was even afraid to hold him in my arms, it seemed to me that awkward movement I can break it. Now, this kid is my favorite, and recently his brother) to Knit for him is great fun.

I also have a doll of domestic production. This doll is also 5 cm (2 inches). It is made in the town Sergiev Posad. It is made of soft plastic and also has movable arms and legs. To have such in the days of my childhood, was the dream of every girl.
Now, when I grew up, my dream has come true) But as they say:” Dreams should come true, no matter how long this requires time”.

More of my works you can see in my little shop