How do collectors choose dolls for their collections? They can be dolls of a certain master or puppet company. Some collectors prefer porcelain beauties from the past Victorian century or plastic dolls from our century.

Perhaps the preference in the collection is determined from the very first doll and the collector seeks to find such dolls. They remind him of his childhood or one of the stories told by his grandmother.
The size of the dolls may also be an idea for a collection. If there isn’t much room for exposition in the house, and the desire to have many miniature dolls, the size is of great importance.
And perhaps the idea of the collection can be the beauty of doll faces.

But there are collectors for whom collecting dolls are part of the profession. I am such a collector. It is very important to have as many different dolls in the collection as possible when creating doll clothes.
In a previous article, I wrote about vintage German Plasticbaby dolls.

And in particular about my last find. She gradually gets new dresses. I will be glad if you like them.

And another amazing dress for a vintage beauty. I wanted to make it in Russian style. It’s a porcelain painting by Gzhel. 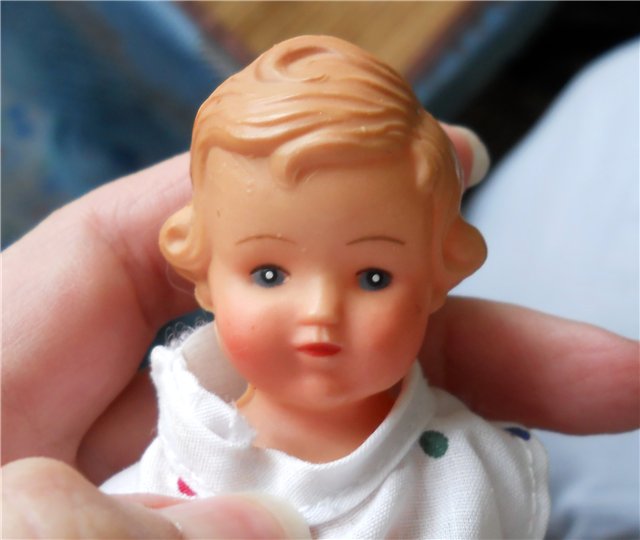 A few facts about the history of the company for fans of these dolls.
The information I found on the website sylvias-puppenhaus.de
The company Preh-Werke of Bad Neustadt / Saale was the first who began to produce plastic toys after the war in 1949 and produced them for only one decade, until 1959.

In 1919 Jakob Preh founded the company and until his death, in the 45th the company was engaged in the production of electronic components. In 1945 it would have been killed and production suspended until 1948.
In 1948, the family was able to return the property and the new Director of Walter Preh decided to produce plastic toys.

On the Preh-Werke website preh.com very little information-it is said only that in 1949 the company began production of toys from polystyrene, mainly remote-controlled cars and dolls. But their dolls have become so popular with collectors.

Hair the dolls were made in the form of a wig or relief. Like many other manufacturers, these dolls were often dressed in national costumes of the different States of Germany and other countries. The logo was an angel with the inscription “PLASTICBABY” stretched on his side in the wings, like this.
On my three dolls, this brand name is very clearly visible.

Preh-Werke also produced quite large dolls with sleeping eyes. They were 46 and 56 cm in size.

Thanks to the sources there were these photos, they give the opportunity to see dolls and other toys.
In 1950, the company released this kind of doll. He was called the pups-bather, if you put it in the water and make “swim”, then his hands will turn like a real swimmer). But I haven’t tried)